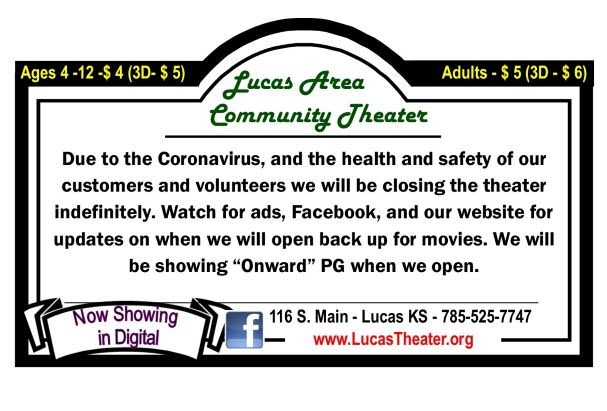 
The Lucas Area Community Theater partnered with the Lucas Area Chamber of Commerce and Lucas PRIDE Committee to host Santa Claus Day on Dec. 15th. At 1pm, the Lucas PRIDE Committee awarded Garrett Bland with a $100 Scholarship as the 2012 PRIDE Youth Award recipient and the Friends of S.P. Dinsmoor’s Garden of Eden awarded Elaina Haberer with a $100 Scholarship as a 2012 High School Graduate working as a Garden of Eden docent. Both, Garrett and Elaina, are excellent volunteers and ambassadors for the Lucas community.


Announcements were made for the Business Drawings.  Brant’s Meat Market gave out two $20 gift certificates to Mary Hickman and Don Fisher.  Leach and Naegele Hardware gave out two $25 gift certificates to Jim Winker and Delma Naegele.  The Bennington State Bank winner was Tammy Hower with a $50 gift certificate. Troy’s Grocery gave away three $25 gift certificates to Tim Wolting, Caryle Ward, and Brent Frederking.  The Lucas Publishing Company gave two free year subscriptions to Larry Hickman and Darrel Zigler. Lucas Area Community Theater winners were Zach Rose winning the 24” Youth Bicycle, while Sameil Felio, Melvin Efken, and Kia Piper each received a 10 Movie Punch Card.  Winners of the Chamber Gift Certificates which were drawn out from all the Business Drawing tickets were $50 Gift Certificate to Gunner Weaver, and $25 Gift Certificates to Tammy Hower and Corbin Ammon. The Lucas businesses had several signing up for the Santa Claus Day Drawings. It pays to shop local!


Winners of the Christmas Decorating Contest were Adam Baker for the Judge’s Choice, Barry Maupin for the Oh Christmas Tree song, and Connie Urban was drawn for the Nativity Scene.  Take a drive around town and enjoy the lights and decorations, and sit or dance if it’s cold at the PRIDE Mini Park to listen to the Christmas music as the lights dance with the music. Get ready for next year’s Christmas Decorating Contest. The categories will be the Judge’s Choice, Christmas Wreath, and Nativity Scene which we will draw a name from all those who have a Nativity Scene.


Everyone enjoyed the free Pepsi and popcorn sponsored by the Lucas Area Community Theater, Inc. and the free movie “Pirates: Band of Misfits” in 3-D sponsored by Lucas Lions Club, Troy’s Grocery, Home Oil Service, Heinze and Associates, Brant’s Meat Market, Rodrick and Minear Funeral Home, Lucas Publishing Company, Bennington State Bank of Lucas and Sylvan Grove, Lynn’s Glass Works, The Farmers Bank of Osborne and Luray, and Sylvan Lions Club.  Santa Claus arrived after the movie to visit with about eighty little boys and girls about what they wanted for Christmas with Gunner Weaver helping the kids and Rita Sharp taking pictures. Yamine Etienne helped Santa hand out the treats which were sponsored by the City of Lucas and Lucas Area Chamber of Commerce.
Posted by Lucas Theater at 10:37 AM No comments: