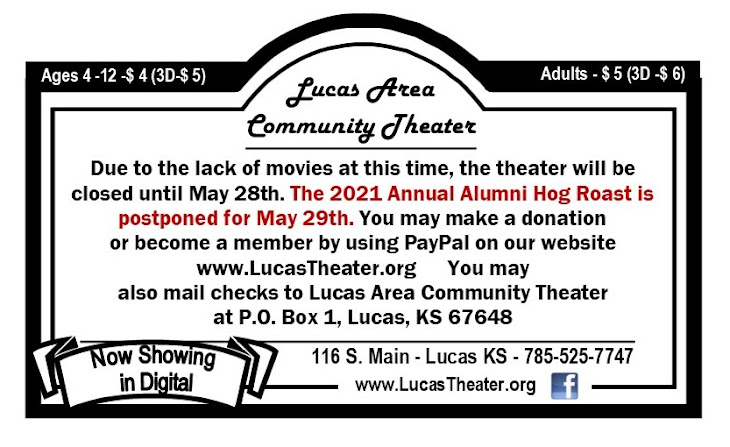 No Movies Until May 28th

Due to the lack of movies at this time, the theater will be closed until May 28th. Thank you for your support!

Posted by Lucas Theater at 2:13 PM No comments:

We have reopened! Face masks are required. Please social distance in the auditorium with every other row closed and 3 seats between you and another group. No Free refills or refills! Thank you for your support!

Posted by Lucas Theater at 9:35 AM No comments:

Theater is Closed for Coronavirus Health and Safety

Due to the Coronavirus, and the health and safety of our customers and volunteers we will be closing the theater indefinitely. Watch for ads, Facebook, and our Website for updates on when we will open back up for the movies. We will be showing "Onward" PG when we open.

R rated movies - Under 17 must be accompanied by parent or adult guardian.
Posted by Lucas Theater at 11:46 AM No comments:

On Dec. 20th, at the Lucas Area Community Theater, the Lucas PRIDE Committee announced that Trai Heenan was the recipient of the $100 Scholarship 2014 PRIDE Youth Leadership Award. Trai was unable to attend the Santa Claus Day event for his presentation, but we appreciate his volunteer work in the Lucas area community. Trai supported the Lucas community with his volunteer work at the Lucas Area Community Theater, as well as projects with the Kids For Christ youth group like community dinners, Adam’s Apple Festival activities, Alumni Weekend projects, and clean up projects in the community. Volunteer work is a great asset to students applying for college. Trai is a student at North Central Technical College in Hays, majoring in Plumbing, Heating, Air, and Electrical.

Erika Nelson was awarded the PRIDE Partnership Award for her work as a great ambassador for Lucas as she travels America documenting World’s Largest Things. Erika created the World’s Largest Souvenir Plate of Lucas, World’s Smallest Mural, and the Czechoslovakian Historical Downtown Mural in the Lucas PRIDE Mini Park. She is a Kansas Humanities Speaker traveling Kansas speaking about grassroots art and folk art. Erika also was instrumental to the conservation and relocation of Miller’s Park in Lucas, working with the Kohler Foundation and Henry Schwaller of Hays to bring the Roy and Clara Miller sculpture collection back to Lucas. She also serves on the board of directors for the Friends of S. P. Dinsmoor’s Garden of Eden. Erika Nelson has been a great asset to the community so we recognize her talents and endeavors to keep Lucas a vital and prosperous community.

Aunt Gertie’s Art and Antiques and Perry’s Pallet “ture” provided some additional prizes at the business drawings. LaDana Seirer and Taylor Fallis were the winners drawn.

Winners of the Christmas Decorating Contest were Jim & Janelle Winkler for the Judge’s Choice, the Garden of Eden with the Angel decoration, and Kristi Mettlen was drawn for the Nativity Scene.  There are so many great Christmas decorations in the Lucas community, be sure to take a drive around town to enjoy the decorations and lights. Next year the Lucas PRIDE Committee will plan some new decorating contest ideas for the community. Watch for more information in 2015.

A crowd of around 70 people enjoyed the free Pepsi and popcorn sponsored by the Lucas Area Community Theater, Inc. and the free movie “How To Train Your Dragon 2” sponsored by Lucas Lions Club, Lucas Area Chamber of Commerce, Lucas PRIDE, Troy’s Grocery, Home Oil Service, Heinze and Associates, Brant’s Meat Market, Rodrick and Minear Funeral Home, Lucas Publishing Company, Bennington State Bank of Lucas and Sylvan Grove, Lucas RV Park and Laundry, The Farmers Bank of Osborne and Luray, Rudy and Rhonda Haberer, Garden of Eden, and Grassroots Art Center.  Santa Claus arrived after the movie to visit with about several little (and big) boys and girls about what they wanted for Christmas. Dharma Couse helped to line up the kids for Santa to get their Christmas list and Rita Sharp took some great pictures of the kids with Santa. Yasmine Etienne and Jedd Rowden helped Santa hand out the treats which were sponsored by the City of Lucas and Lucas Area Chamber of Commerce.


Friends of the Garden of Eden Scholarship

Michaela Merchant was awarded a scholarship as a 2014 high school graduate employee of the Garden of Eden. Erika Nelson of the Friends of S.P. Dinsmoor’s Garden of Eden presented Michaela a certificate and $100 for her work as a docent, telling the story of Dinsmoor’s Cabin Home and sculptural garden. Michaela is a student at Hays State University, studying Psychology.
Posted by Lucas Theater at 4:18 PM No comments: