The Lucas Area Community Theater partnered with the Lucas Area Chamber of Commerce and Lucas PRIDE Committee to host Santa Claus Day on Dec. 15th. At 1pm, the Lucas PRIDE Committee awarded Garrett Bland with a $100 Scholarship as the 2012 PRIDE Youth Award recipient and the Friends of S.P. Dinsmoor’s Garden of Eden awarded Elaina Haberer with a $100 Scholarship as a 2012 High School Graduate working as a Garden of Eden docent. Both, Garrett and Elaina, are excellent volunteers and ambassadors for the Lucas community.


Announcements were made for the Business Drawings.  Brant’s Meat Market gave out two $20 gift certificates to Mary Hickman and Don Fisher.  Leach and Naegele Hardware gave out two $25 gift certificates to Jim Winker and Delma Naegele.  The Bennington State Bank winner was Tammy Hower with a $50 gift certificate. Troy’s Grocery gave away three $25 gift certificates to Tim Wolting, Caryle Ward, and Brent Frederking.  The Lucas Publishing Company gave two free year subscriptions to Larry Hickman and Darrel Zigler. Lucas Area Community Theater winners were Zach Rose winning the 24” Youth Bicycle, while Sameil Felio, Melvin Efken, and Kia Piper each received a 10 Movie Punch Card.  Winners of the Chamber Gift Certificates which were drawn out from all the Business Drawing tickets were $50 Gift Certificate to Gunner Weaver, and $25 Gift Certificates to Tammy Hower and Corbin Ammon. The Lucas businesses had several signing up for the Santa Claus Day Drawings. It pays to shop local!


Winners of the Christmas Decorating Contest were Adam Baker for the Judge’s Choice, Barry Maupin for the Oh Christmas Tree song, and Connie Urban was drawn for the Nativity Scene.  Take a drive around town and enjoy the lights and decorations, and sit or dance if it’s cold at the PRIDE Mini Park to listen to the Christmas music as the lights dance with the music. Get ready for next year’s Christmas Decorating Contest. The categories will be the Judge’s Choice, Christmas Wreath, and Nativity Scene which we will draw a name from all those who have a Nativity Scene.


Everyone enjoyed the free Pepsi and popcorn sponsored by the Lucas Area Community Theater, Inc. and the free movie “Pirates: Band of Misfits” in 3-D sponsored by Lucas Lions Club, Troy’s Grocery, Home Oil Service, Heinze and Associates, Brant’s Meat Market, Rodrick and Minear Funeral Home, Lucas Publishing Company, Bennington State Bank of Lucas and Sylvan Grove, Lynn’s Glass Works, The Farmers Bank of Osborne and Luray, and Sylvan Lions Club.  Santa Claus arrived after the movie to visit with about eighty little boys and girls about what they wanted for Christmas with Gunner Weaver helping the kids and Rita Sharp taking pictures. Yamine Etienne helped Santa hand out the treats which were sponsored by the City of Lucas and Lucas Area Chamber of Commerce.
Posted by Lucas Theater at 10:37 AM No comments:

The "Not An Ordinary Kansas Garden" Documentary Film Premiere about the Grassroots Art in Lucas by Kisa Clark on Oct. 21st was a success. People of all ages came to enjoy the hour long film about the Garden of Eden & Restoration, the Grassroots Art & artists, Flying Pig Studio & Gallery, World's Largest Things, and Bowl Plaza First Flush. DVD's are for sale at the Grassroots Art Center and on eBay.
Posted by Lucas Theater at 1:40 PM No comments:

Lucas 125th Celebration Happening at the Lucas Theater on Sept. 29

The Lucas 125 Celebration at the Lucas Theater was a success on Sept. 29th. The Parade at 10am stopped in front of the Theater with over 60 participants and announcers Rod Ammons and Greg Heinze were heard throughout Main Street commenting on the great Celebration and parade entries. The Lucas Chamber of Commerce Bucket Lunch served around 150 in the Lucas Theater Community Room with Memory Quilts while PowerPoint Presentation was shown in the auditorium. Many took their Bucket Lunch or Sack Lunch to go to the PRIDE Mini Park for Music Entertainment by Thad Beach and the Smoky Hills Brass Quintet. At the Theater - 3pm & 7pm - "The Mystery Murder of Fred Dininny" Performance by the FRINGE Theatre Group of FHSU. Lucas Historical Re-enactment of the murder of Fred Dininny of Lucas. Around 130 people enjoyed each showing. Amanda Steinle and her crew did a fantastic job.
Posted by Lucas Theater at 10:54 AM No comments:


On Aug. 7 & 8, the Lucas Theater hosted an “Old & New Memories” Quilt Show each afternoon. Around 50 quilts were shown with old hand stitched quilts that were well loved and new contemporary style quilts. Each quilt held a special memory or story. The Theater was covered with quilts. Miki Steinle helped Lynn Schneider place the quilts over tables and seats.


Those who brought in quilts included LeeAnn Herold, Kristie and Rose Marie Boland, Shirley Svaty, Margaret Naegele, Lois Cooper, Linda Jepsen, Dee Durham, Tess McKnight, Sue Wenthe, Karlene Svaty, Lynn Schneider, Karen Wallace, Gerry Parker, Mary Lou Steinle, and Nancy Jo Leachman. Some of the quilts were handed down by family and some had traveled back home to Lucas. Lois Cooper had an old friendship quilt that found its way back to Lucas while Karlene Svaty brought in the quilt made in 1995 for Pastor Max and June Frolick on his retirement from the ministry. Pastor Max was the Lucas minister for 7 years before they retired to Abilene. When he passed away in the spring of 2012 and his wife was no longer able to stay at home, the family gave the quilt to Karlene to keep in Lucas. Karen Wallace had the last quilt made by the Lucas Methodist Church ladies on display. 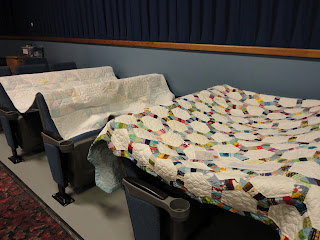 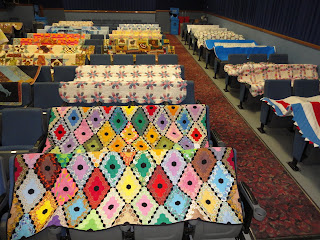 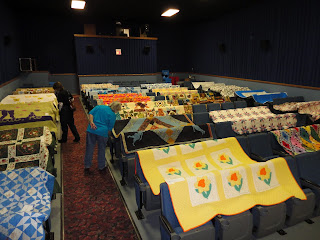 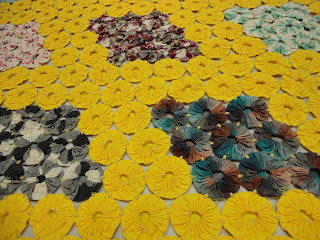 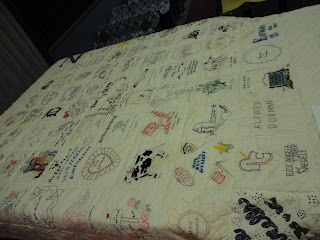 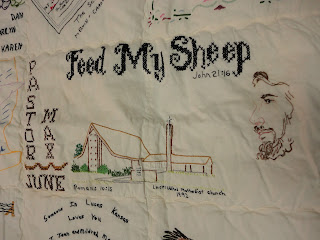 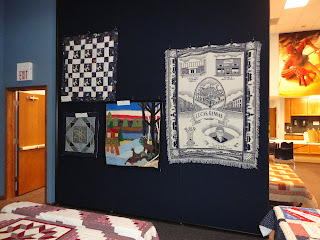 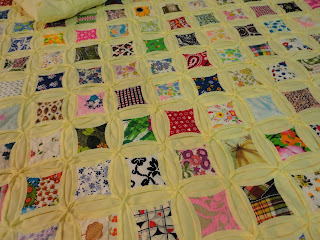 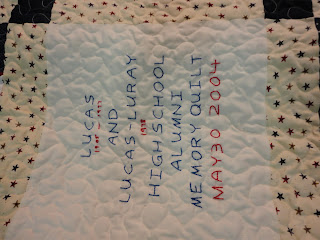 Some from the quilt show stopped by the home of LeeAnn and Ray Herold on Aug. 7th for a demonstration of a quilting machine. It was a treat to see the modern day quilting machine for those who had quilted by hand with family and friends. The Herold’s were very gracious to show their quilting areas that still have several friends come together to socialize while piecing and quilting just like the early day settlers and those who used to quilt together at the Lucas Methodist Church just a few years ago.


At the end of the show on Aug. 8th, the winner of the quilt made by LeeAnn and Ray Herold for the Lucas Area Community Theater as a fundraiser was drawn. The winner was Betty Pilcher of Lebanon Kansas. Lynn Schneider’s mother, Gladys Kennedy of Lebanon, offered to sell chances for the lovely “Victorian Garden” quilt, so one of those chances was the winner. Betty Pilcher is excited to receive the quilt. 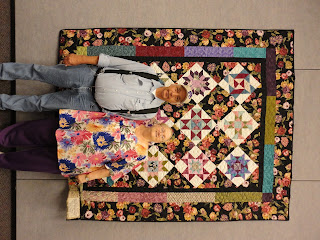 The Lucas Theater Quilt Show theme for next year is “Spring, Summer, and Scrappy Sizzlers”. The show will certainly be bright and cheery with quilts, wall-hangings, and other handiwork like crochet, knit, and embroidery.
Posted by Lucas Theater at 10:49 AM No comments:

On July 17th, 7pm at the Theater. Laughing Matters, Jay and Leslie performed Lucky Stars for all ages. Jay and Leslie entertained the crowd with some tricks before the show like throwing the invisible ball into the sack and spinning a plate on their finger. Kids and adults helped with the stories and tricks throughout the show. The Three Little Pig story was a fun time with the kids and adults like Eric Abraham of the Flying Pig Studio and Gallery and Jera Bates with her magical hat. The kids were the house made of straw, sticks, and bricks with a door and chimmney. Jay and Leslie had a great time in Lucas before the show exploring Bowl Plaza, the Flying Pig Studio and Gallery, and the Garden of Eden.
Posted by Lucas Theater at 4:00 PM No comments:

On May 26th, the Lucas Area Community Theater held their delicious Hog Roast from 11 a.m. to 1 p.m. in the Theater. Over 250 people enjoyed the meal and homemade ice cream by the Women of the Methodist Church. Bryce Naegele won the Cougar Stepping Stone and Butch Minear won the Demon Stepping Stone. We are still selling chances for the beautiful "Victorian Garden" Quilt made and donated by LeeAnn and Ray Herold.
Posted by Lucas Theater at 10:53 AM No comments:

On Mar. 24th, several ladies and youth enjoyed music and teaching of Eternity Focus at the Lucas Theater. Eternity Focus is an award winning group whose music has touched countless lives for Jesus Christ across the nation. These four sisters; Alika, Danika, Janika and Lainika Seaman from Lebanon, Kansas have released four albums. Hear them share the inspiring message of God's grace, healing, hope and love through testimony and song. www.EternityFocus.com
Posted by Lucas Theater at 2:38 PM No comments:

The Russell County Sheriff Dept. and the Lucas Area Community Theater hosted free movies on Dec. 31st for the area communities. The audience of over 160 watched "The Muppets" & "New Year's Eve". Our volunteers did a great job working with the movie goers on their concessions. Thanks Bill, Sheri, Bailey, &; Delaney Herold, &; Jedd Rowden, Trai Heenan.
Posted by Lucas Theater at 10:57 AM No comments: