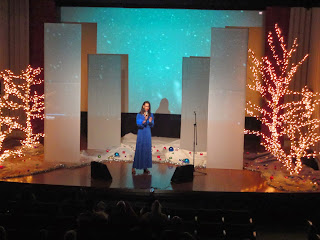 Successful Lucas Holiday Gift Show on Nov. 23rd from 9am to 2pm

Lucas Theater and Lucas Chamber of Commerce hosted the Holiday Gift Show on Nov. 23rd at the Lucas Theater from 9am to 2pm.  At 9am, the Kids For Christ youth group had their Bake Sale in the front lobby. From 11:30am to 2pm, the Lucas Chamber of Commerce had sloppy joes, chips, drink, and dessert for sale and served by the Kids For Christ youth group. About seventy people enjoyed shopping while about fifty of them also enjoyed the meal. The vendors were very pleased with their sales. Vendors included Avon, Mary Kay, Thirty-One Bags, Scentsy, Pampered Chef, stained glass and etchings, Christmas ornaments, quilt wall hangings, jewelry and accessories, Paintings on Glass, Bird Houses, fabric novelty gifts, fabric purses and accessories, laser engraved personalized gifts, recycled pallet gifts, photographs and postcards, metal Christmas trees and wreaths, box spring art.
Posted by Lucas Theater at 5:15 PM No comments:


The Lucas Area Community Theater hosted the 14th Annual Spook Parade on Oct. 26th at 2pm. Some Ninjas, Shadows, Angels (good & bad), and Vampires (who like neck-tarines!) visited with emcee, Rod Ammons, on stage for family and friends to enjoy their costumes and auditions. The judges were Connie Dougherty, Von Rothenberger, Mari and Mike Tucker. It was a tough job but somebody had to pick the winners for the “scariest” and “most unique”. Prizes were donated by the Lucas Chamber of Commerce, Lucas PRIDE, Lucas Area Community Theater, Russell County Community Partnership, and Russell McDonalds.


Treats were handed to each of the participants, sponsored by the City of Lucas, Russell County Community Partnership, and the Lucas Chamber of Commerce. Rod Ammons, with helpers Lynn & Les Schneider, Yasmin Etienne, Dharma Couse, and Jedd Rowden kept the group of tricksters organized for the judges. What will they think of for next year’s Spook Parade?

Posted by Lucas Theater at 10:50 AM No comments:


The program has started off this past week with the Lucas Theater hosting one of the Lucas and area Libraries Summer Reading Program, “Dig into Reading” special presentations. On June 11th, the Kansas Wetlands Education Center presented a program at the Theater on Prairie Dogs.


There will be a DVD movie afternoon on, Tuesday, June 18th at 3pm in the back Theater Community Room for those in First Grade thru 6th Grade. They will enjoy a healthy snack. The various age groups will be divided up for other activities throughout the summer which will include some Main Street clean up and beautification, drawing activities for creative art projects for Main Street and City Park, games, and healthy snacks.

During July and August, the youth helped with community projects like putting the "Put In Cups" sign for the Adam's Apple Festival and Highland Games. Then again they helped with the sign in Sept. for the Sunflower Visual Arts Festival. And again for the Oct. Pedal Pull and Fall Festival sign.

They enjoyed painting on the Barn Quilt Project for the Lucas PRIDE Committee in August. The Barn Quilts were used on the Chamber and PRIDE float for the Adam's Apple Festival Parade. The Barn Quilts are now on display in the PRIDE Mini Park, but will be moved to a permanent location during the Christmas Holiday.
Posted by Lucas Theater at 3:05 PM No comments:

Many alumni and friends and visitors enjoyed a Roast Hog sandwich, baked beans, chips or potato salad, and drink on May 25th from 11am to 1pm in the Theater Community Room. The cooks, Greg Bland and Frank Pool, prepared for a crowd to come eat their delicious food. Many helped with the supplies via the shopping list at Troy’s Grocery store. It was comfortable inside the Theater and the crowd enjoyed visiting. Donations for the meal and chances will go towards Theater repairs and special performances.


The Women of the Church had their homemade ice cream for sale in the Theater Community Room. The Lucas Area Chamber of Commerce also had several photos of the Lucas area for sale.

May 5 @ 4:30pm at the Lucas Area Community Theater. Concessions for Sale!
Posted by Lucas Theater at 10:57 AM No comments: