The Lucas Area Community Theater celebrated its 10th year of hosting the Lucas Santa Claus Day on Dec. 18th. The crowd was steady coming through the doors before 1 p.m. with over 100 people enjoying the Chamber Business Drawings, free small pop and popcorn, free movie, and Santa, of course.

Announcements were made for the Business Drawings. Brant’s Meat Market gave out two $20 gift certificates to Danny Naegele and Mary Naegele. Leach and Naegele Hardware gave out two $25 gift certificates to Dave Bricker and Ryan Wolting. The Pony Express Community Bank winners were Steve Hawkins with a $15 gift certificate and Marlys Yarnell with a $10 gift certificate. Troy’s Grocery gave out a $50 gift certificate to Frank Pool and a Nativity Set to Mildred Mettlen. The Lucas Publishing Company gave a free year subscription to Mary Ann Steinle. Lucas Area Community Theater winners were Bailey Evans winning the Wii Game Console, while Jensen Farrington, Gale Kruckenberg, and Mary Ann Steinle each received a 10 Movie Punch Card. Winners of the Chamber Gift Certificates which were drawn out from all the Business Drawing tickets were $50 Gift Certificate to Jamie Beatty, and $25 Gift Certificates to Jeremy Bray and Brent Fredricking. Our Lucas businesses draw several patrons from out of town to Lucas to shop. Way to go Lucas Businesses!

Winners of the Christmas Decorating Contest were Adam Baker for the Judge’s Choice prize of the Christmas Story DVD complete with cap gun and matching pair of miniature leg lamps, Sonny and Lois Cooper for the Rhudolph the Red-Nosed Reindeer prize of the Prancer DVD with a Rhudolph singing Red-Nosed Reindeer, and Jim and Vicki McDowell were drawn from a box of about 15 names who had Nativity Scenes for the prize of The Nativity DVD and a nativity stained glass hanging. Take a drive around town and enjoy the lights and decorations, and sit awhile at the PRIDE Mini Park to listen to the Christmas music as the lights dance with the music. Get ready for next year’s Christmas Decorating Contest. The categories will be the Judge’s Choice, Santa Claus Is Coming To Town Song, and Nativity Scene which we will draw a name from all those who have a Nativity Scene.

Everyone enjoyed the free Pepsi and popcorn sponsored by the Lucas Area Community Theater, Inc. and the free movie “Cats and Dogs 2” in 3-D sponsored by Lucas Lions Club, Troy’s Grocery, Pony Express Community Bank, Home Oil Service, Heinze and Associates, Brant’s Meat Market, Rodrick and Minear Funeral Homes, Lucas Publishing Company, Bennington State Bank/Sylvan Grove, Land Pride Mfg., and Sylvan Lions Club. Santa Claus arrived after the movie to visit with about eighty little boys and girls about what they wanted for Christmas with Jamie Beatty helping the kids and Rita Sharp taking pictures. Raquel Sharp helped Santa hand out the treats which were sponsored by the City of Lucas and Lucas Area Chamber of Commerce.
Posted by Lucas Theater at 4:36 PM No comments:

It was a small crowd attending the Ladies Retreat with Eternity Focus at the Lucas Area Community Theater.  Eternity Focus led Praise and Worship in the morning and afternoon. Pastor Sandy Kennedy and Mary French from Faith Community Church in Great Bend KS spoke on God's gift of his Son Jesus our salvation and praying His Word. Check out the sermons on http://www.faith4greatbend.com/  Check out Eternity Focus on http://www.eternityfocus.com/ At 2:30 p.m., Eternity Focus blessed us with their Christmas Concert by donation.  Everyone had a good time and were blessed with good music, good teaching, and good food.
Posted by Lucas Theater at 9:44 AM No comments:

Over 60 people attended the Holiday Gift Show on Nov. 13th, from 10 am to 3 pm at the Lucas Theater, crafters and hostesses  showcased their products just in time for shopping for the holidays. Gifts included jewelry, stained glass and etchings, Mary Kay cosmetics, tea towels, knives, Christmas ornaments, Tupperware with a new dealer, Pampered Chef, Miche purses, Smelly Jelly, floral, quilt wall hangings, books, Scentsy Candles, framed photographs, It Works fitness, and Young Living Essential Oils with hand massages and flavored bottles of water. The admission was $1 for adults, $.50 for students, and little ones are free. Winners of the drawings for $10 Gift Show bucks were Trent Leach, Stephanie Svaty, and Charlene Walker, while students and little ones did Make and Take door hangers and bookmarks. Lois Cooper won a gift from It Works and Lola Brant won a gift from Young Living Essential Oils.
Posted by Lucas Theater at 3:27 PM No comments:

The Lucas Area Community Theater hosted the 11th Annual Spook Parade on Oct. 30th at 4pm. The auditorium was packed with friends and relatives of the 68 participants, ranging in ages from under 1 year old to…not sure how old that “antique witch” was. The judges were Lois Cooper, Sharon Albert, Kay Marshall, and Connie Dougherty. They had quite a job picking the “scariest” and “most unique” from the group of animals, witches, devils, spooks, aliens, celebrities, and transformers. Rod Ammons, dressed in his farm chore best, emceed the Spook Parade with the help of Raquel Sharp, Jamie Beatty, Les and Lynn Schneider. Prizes were donated by the Lucas Chamber of Commerce, Lucas PRIDE, Garden of Eden, Troy’s Grocery, and Russell McDonalds. Treats were handed to each of the participants, sponsored by the City of Lucas and Lucas Chamber of Commerce.

Gene and Kayanne Meitler, Heartland Hay, gave everyone a hayrack ride after the Spook Parade. Everyone had a good time watching and participating in the Halloween event.

Winners of the Great Pumpkin Carving Contest at the Flying Pig Studio and Gallery were announced by Rod Ammons. The People’s Choice votes earned $34.55 for Bowl Plaza. Joel Mettlen was 1st Place with “Nailed” at $8.42, Justin Gray was 2nd Place with “Let Me Out” at $6.80, Joel Mettlen was 3rd Place with “Barbie Eater” at $5.31, and Janea Gray was 4th Place with “Googlie Eyes” at $5.08. Tess Dunkel McKnight did a great job with a demonstration on carving pumpkins for the Haunted Evening event on Oct. 23rd.
Posted by Lucas Theater at 3:23 PM No comments:


The Theater Lunch Stand was a success with over 100 people enjoying the pulled pork and baked beans prepared by Frank Pool. Thanks to Connie Urban, the Theater was decorated with Demon and Cougar uniforms. Lynn Schneider prepared a display of pictures showing our volunteers who were Demons and Cougars along with other volunteers who worked in the Theater from the Lucas area. It was a fun and busy day at the Theater and in Lucas!

The winner of the "1 Year Movie Pass" to the Lucas Area Community Theater was Lukas Bretz. Congratulations Lukas!
Posted by Lucas Theater at 11:11 AM No comments: 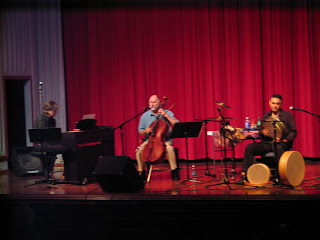 The Salina Arts and Humanities Foundation sponsored the Trio Globo Concert on June 8th at the Lucas Theater. Trio Globo consists of three Grammy award winning artist/composers: Eugene Friesen, cellist; Howard Levy, harmonica/piano; and Glen Velez, frame drums. The audience enjoyed the easy listening songs and the little intros about each song telling why they wrote the song or what drum was featured in the song. http://www.trioglobo.com/
Posted by Lucas Theater at 8:59 PM No comments: 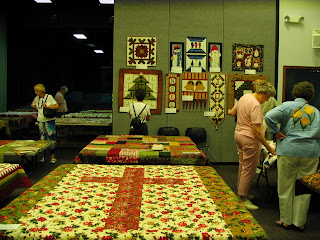 The Lucas Area Community Theater hosted a Quilt Show on June 9 and 10. About 47 quilts, wall hangings, and table runners were brought in for display by Tess Dunkel McKnight, Lois Geir, LeeAnn Herold, Geri Parker, Eva Grauer, Shirley Svaty, Luanna Maes, and Lynn Schneider. There were over 60 people who enjoyed looking through the quilts and handmade pieces from all over Kansas, including Lucas, Inman, McPherson, Lindsborg, Canton, Marquette, Galva, Lincoln, Sylvan Grove, Wichita, Wilson, and San Carlos, California. This program is supported in part by the Kansas Arts Commission, a state agency, and by the National Endowment for the Arts.
Posted by Lucas Theater at 6:30 PM 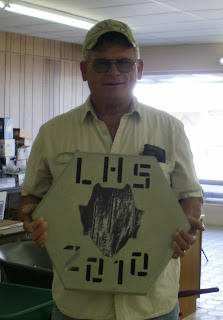 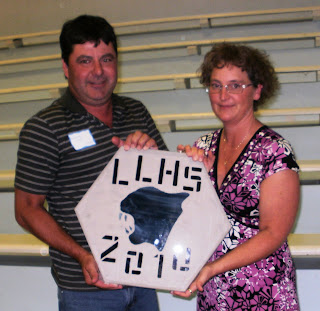 The Annual Alumni Hog Roast fundraiser for the Lucas Area Community Theater was held on May 29 from 11 a.m. to 1 p.m. in the Theater community room. There was plenty of delicious roast hog prepared by Greg Bland and very tasty pork and beans by Frank Pool along with potato salad or chips and tea or water. Over 300 people enjoyed the lunch and visiting with friends and alumni. Winner of the Cougar LLHS Stepping Stone was Michael and Stephanie Svaty. Winner of the Demon LHS Stepping Stone was Dave Bricker.
Posted by Lucas Theater at 10:28 AM No comments:

On Sunday, May 2nd, the Theater hosted the Centerstage Spring Dance Recital at 2 p.m. Instructor, Erin Streit, coordinated an excellent spring dance recital with her thirty-three students. Watch for pictures to be posted to the Lucas Flickr page at www.LucasTheater.org
Posted by Lucas Theater at 11:55 PM No comments:

Ladies Retreat at the Lucas Theater on Jan. 9, Sat. About forty women of all ages enjoyed Praise and Worship with Eternity Focus of Lebanon Ks.http://eternityfocus.com/ and the humorous practical Bible teachings by Pastor Sandy Kennedy of Faith Community Church in Great Bend. http://faith4greatbend.com/
Watch for details on the next Ladies Retreat or some quarterly get togethers for food and videos from Mark Gungor of www.laughyourway.com
Posted by Lucas Theater at 8:34 PM No comments: 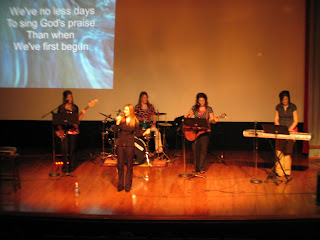 Eternity Focus of Lebanon Ks ministered in music and videos at the Lucas Theater on Jan. 9th at 2:30 pm. About forty people enjoyed the music and stories from the Seaman sisters. It was a great concert. They now have a Christmas CD and show, maybe we will have them back before Christmas next year. Eternity Focus has CD's available to purchase. Go to http://eternityfocus.com/ to listen to their music.

Posted by Lucas Theater at 6:15 PM No comments: